Learn more about the 25 different entries from the 2017 Data Challenge.

Rush Hour Opportunities
View the full project
This submission compares 2016 Hubway trip data to Google Maps travel predictions, in an attempt to uncover the frequency of use and overall utility of riding Hubway versus taking the T during rush hour. Specifically, morning commutes traveling into the city center and evening commutes traveling out of the city center were studied--a dataset of 71,000 rides, just 6% of all rides in 2016. Further analysis revealed a significant time savings for rush hour commuters, in favor of riding Hubway. The data also pointed to several strategic marketing opportunities which could lead to boosted ridership. 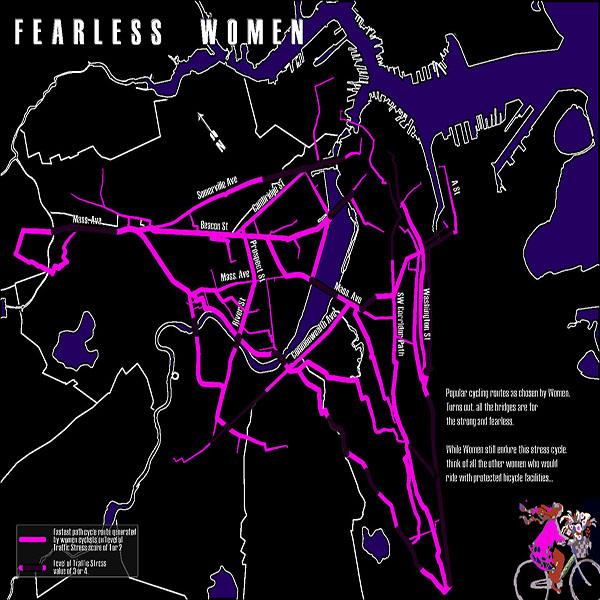 Fearless Women
View the full project
Cycling routes have been developed using 2016 data for two weeks in June from female annual riders. Using a shortest path methodology, the paths were estimated and were then enumerated as the same routes overlapped. All pink routes received an LTS score of 1 or 2, while a 3 or 4 (for the strong and fearless) is indicated by a darkened blotch. Clearly, women still transcend the cycling barriers of the bridges and poor connections throughout Boston’s cycling network. Women are fearless. But, think of all the other women who would bike if these gaps were filled with protected bike facilities... 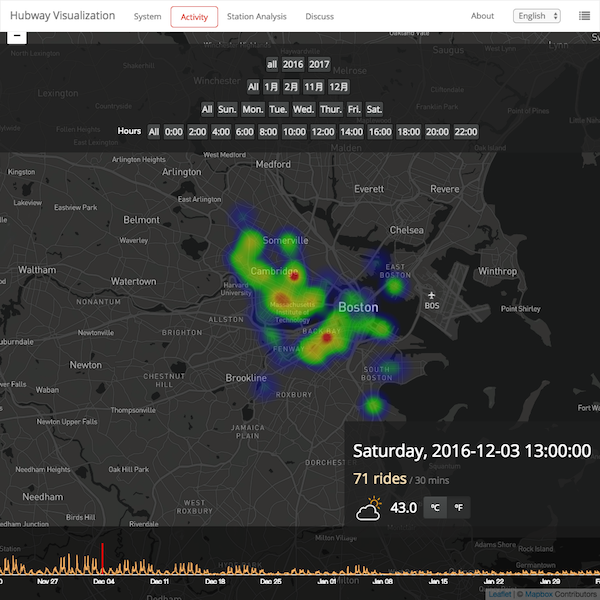 Bike Visualization
View the full project
Bike Visualization aims to turn bike share open data into understandable visualization. We use objective way to show the visualization. People can view the visualization in three different perspectives. System Analysis: show this system's daily, weekly trips usage and the popular station, popular borrow-return pair station. Station Analysis: show each station's daily trips usage, and also demonstrate the origin-destination relationship with other station. Activity Analysis: Use heatmap to show the popular usage area at half of an hour. Plus, it's a mobile first website! 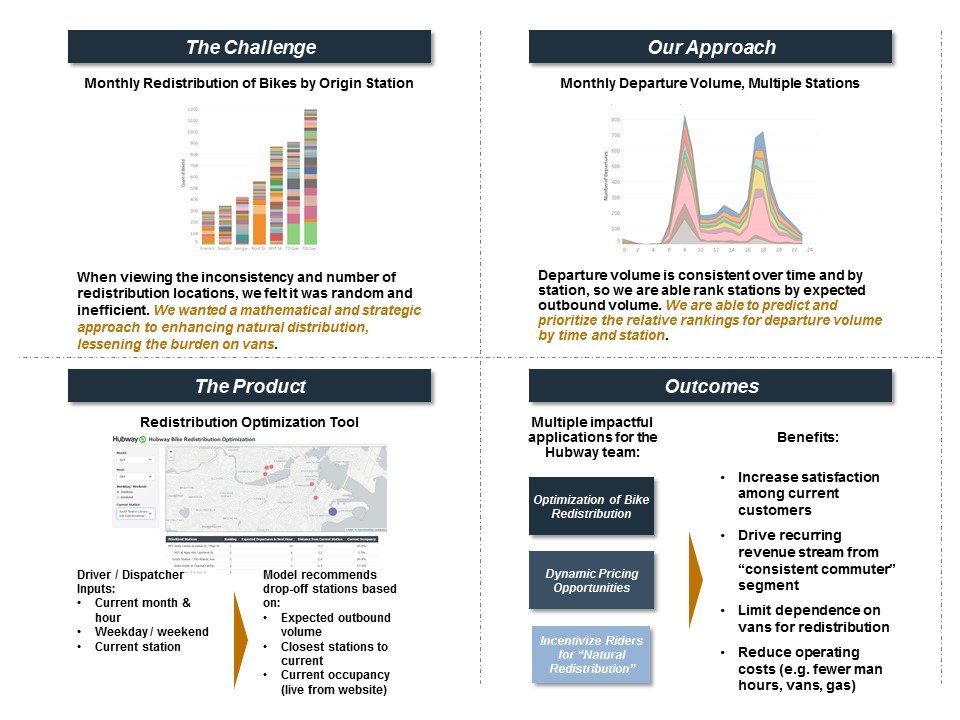 Hubway Bike Redistribution Optimization
View the full project
As colleagues at Stax and Hubway users, we got together with the goal of supporting a Boston service that we love. More than winning a contest, we felt our time and teamwork would further the success of Hubway and its longevity in Boston. We set out to analyze the ecosystem and dynamics of bike distribution, to help Hubway decrease manual efforts and reduce costs. We concluded that the redistribution of bikes could be greatly enhanced by identifying in real-time the most optimal stations which put bikes into the field quickly and effectively. So, we built you a tool to do just that. 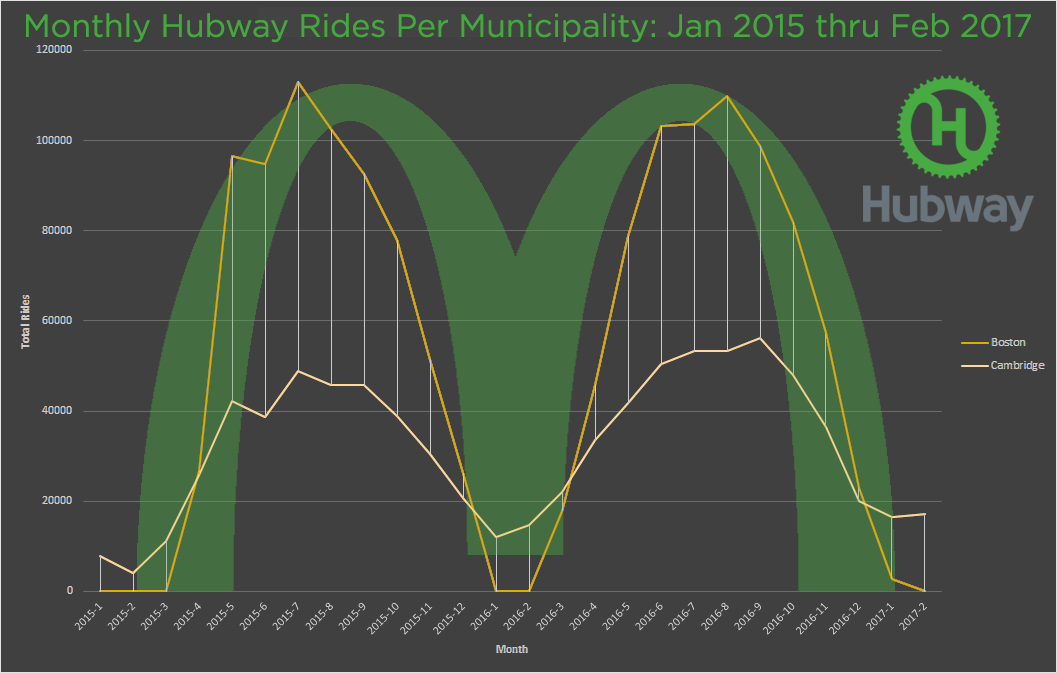 Monthly Trips by Municipality
View the full project
Total Hubway rides per month from January 2015 through February 2017, separated by starting municipality in Boston or Cambridge. 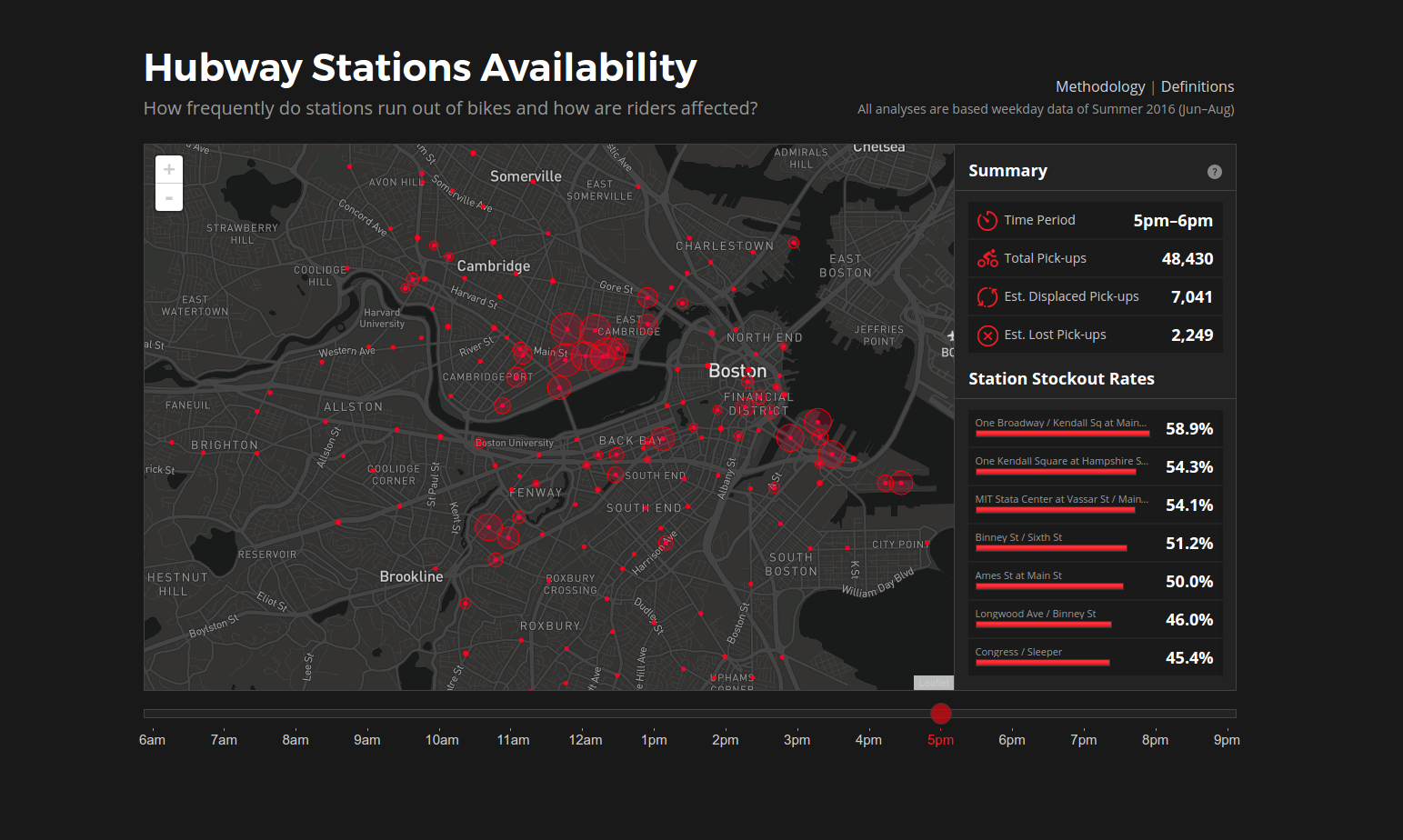 Hubway Stations Availability
View the full project
How frequently do Hubway stations run out of bikes and how are the riders affected? This interactive visualization lets you explore the station stock-out (i.e., having no bike in its docks) patterns across time and location in the Boston metropolitan area. We also quantify the impact of stock-outs by estimating how many rides might have been displaced or lost over time. The results of this analysis may help inform future planning and operations of the system. 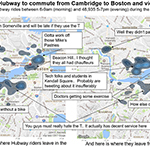 Hubway riders who commute from Boston to Cambridge (and back)
View the full project
Hubway is my go-to to get from Boston to Cambridge. I was curious to see whether others used Hubway for their commute. For this analysis, I used 2015-2016 data, and added variables to look at seasonal patterns and time of day. I assumed that anyone using the bikes during the times indicated to get from Boston to Cambridge is probably commuting. The plots show clusters of rides from specific parts of town in the morning and evening. I was surprised to see so many Kendall/MIT folks using Hubway in the evening. There are some hot spots that might inform redistribution by station. 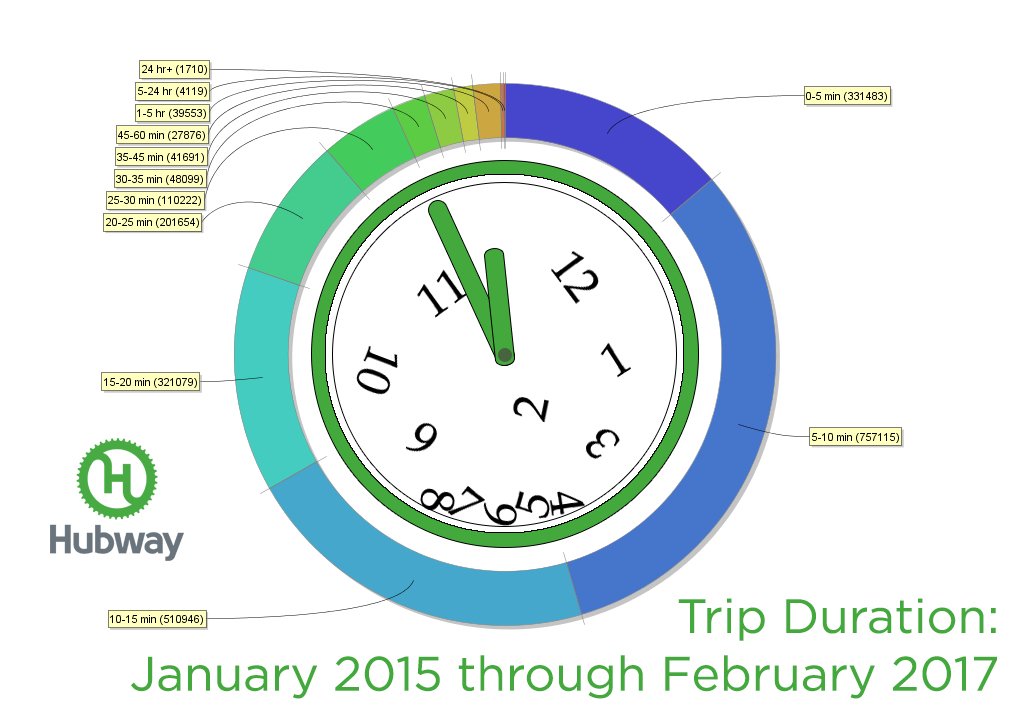 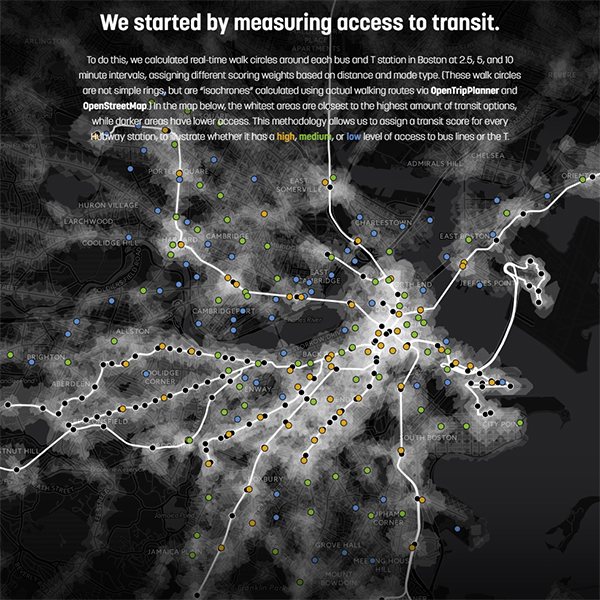 Hubway's Role in the Greater Boston Transit System
View the full project
Our web-based visualization seeks to explore what role Hubway plays in the Greater Boston transit system. Beginning with a calculation of transit access for each Hubway station and supplemented by routes-generation between Hubway trip origin and destination points, our team posits that Hubway serves three roles in the region: as a first/last mile connector to the T, as a supplement to T service gaps in areas of low transit access, and as replacement for T service in areas of high transit access. 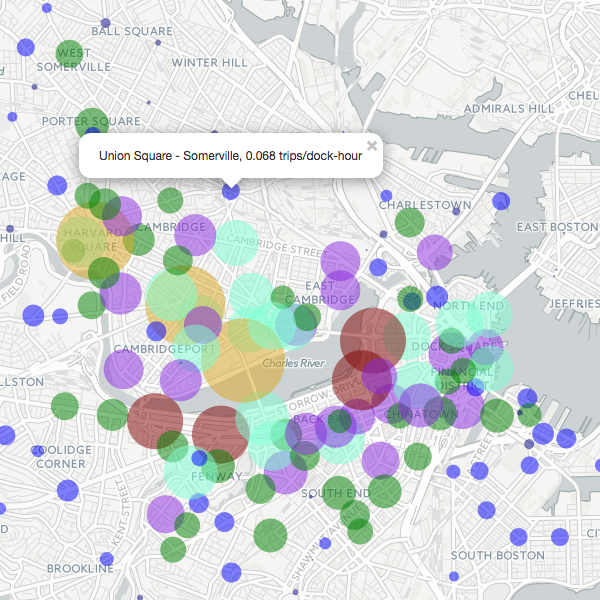 The Extraordinary in the Hubway Data
View the full project
As engineers and scientists with a keen interest in civic responsibility and public policy, we set out to find the extraordinary in the last six years of Hubway data. With the curiosity of five-year olds, we asked "Where?" and “Why?” and "How?" at every turn of our exploration. To aid our investigation, we built tools to query the full dataset and visualize results in realtime, and we've made these tools available for others to conduct their own explorations. Join us on our adventure through five million Hubway trips as we share what we've asked, what we've learned, and what we've built. 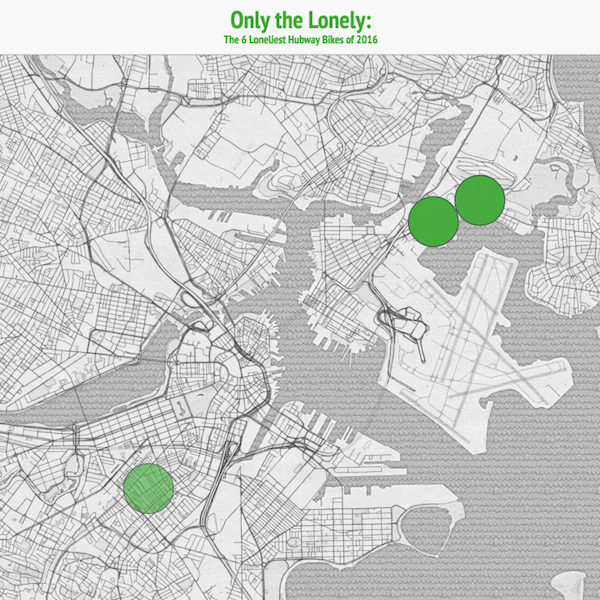 Only the Lonely
View the full project
The 6 Loneliest Hubway Bikes of 2016 - big data techniques to produce the smallest of results. 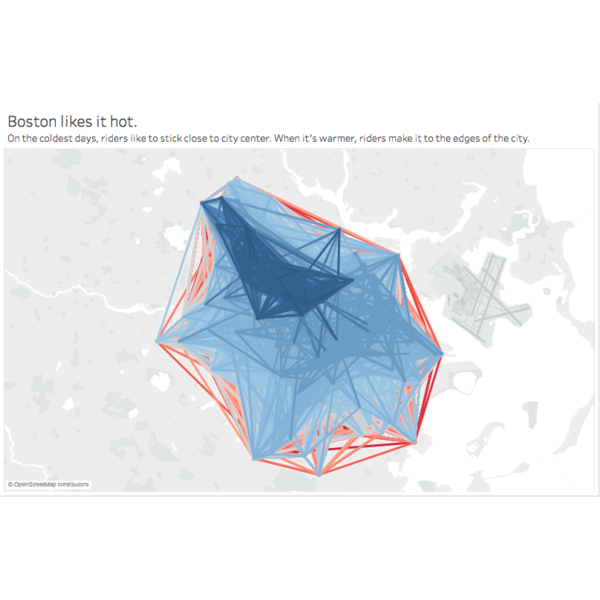 Powered by the Sun
View the full project
Turns out Bostonians ride Hubway bikes further and more frequently when the weather is nice. Who would have known? Almost all of the days with the lowest ridership in 2015 correspond with a high amount of precipitation. In addition, Hubway saw a significant uptick in ridership (especially from places farther from city center) when the weather warmed up. (Weather data uses daily average temperatures in Fahrenheit and daily rainfall totals from the NOAA.) 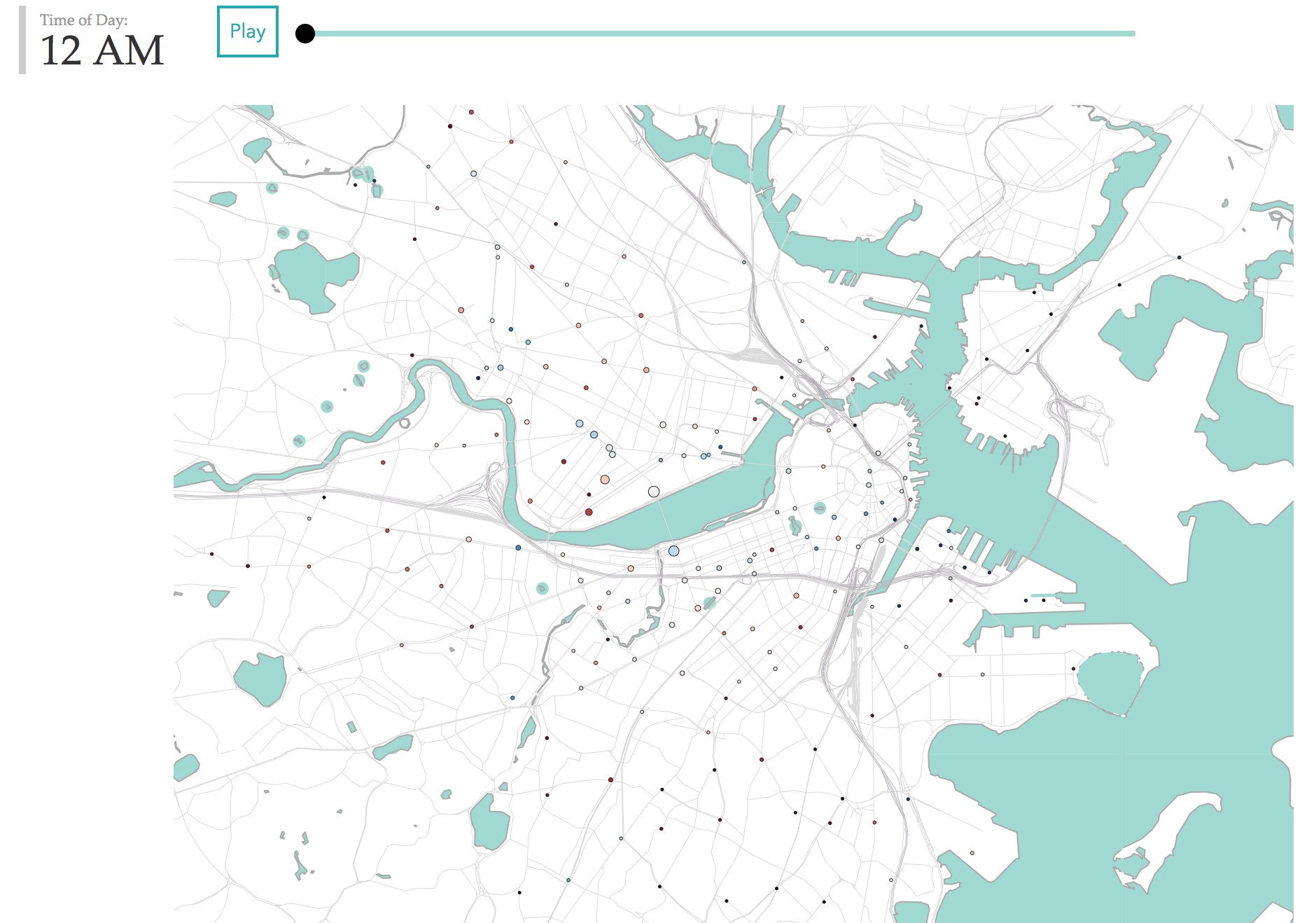 Moving Maps
View the full project
Maps of Hubway travel patterns and how they vary seasonally and over the week. Correlations between stations in terms of demand, and a monte carlo simulation following a bike across the network. 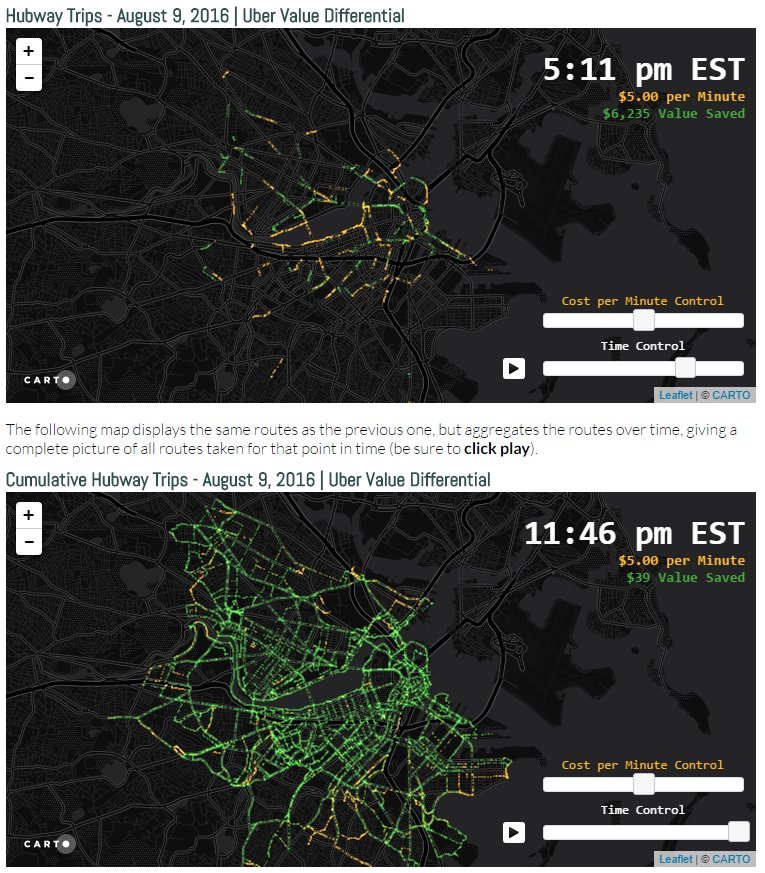 The Value of Hubway
View the full project
One of Hubway's significant advantages over other transportation service providers is the effectively zero marginal cost for every ride. We wanted to compare the value of each Hubway trip to a similar Uber trip and identify the areas where Hubway users generate the most value. Using the Uber API and latitude / longitude coordinates for every Hubway station, we were able to pull uber cost and trip time data between each start and end station pair (referred to as a route) in 2016. We also compared using Hubway to taking transit, getting the transit data from the Google Maps API. 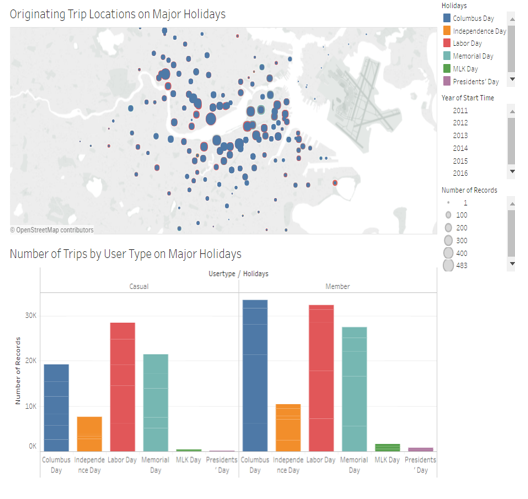 Rider Tendencies by User Type
View the full project
Most Hubway riders have monthly or annual memberships, while a minority have day-passes, which is evident on the first map where the orange dots represent those with memberships and the blue dots reflect the day-pass riders. Interestingly, on certain holidays, this dynamic becomes more balanced, and on other holidays, trips made by casual riders surpass those made by members in some years. On Labor Day weekend 2013, both casual riders and members made around 4,500 trips. On Independence Day 2016, the trips by both types are similar, though casual riders beat members by almost 300 trips. 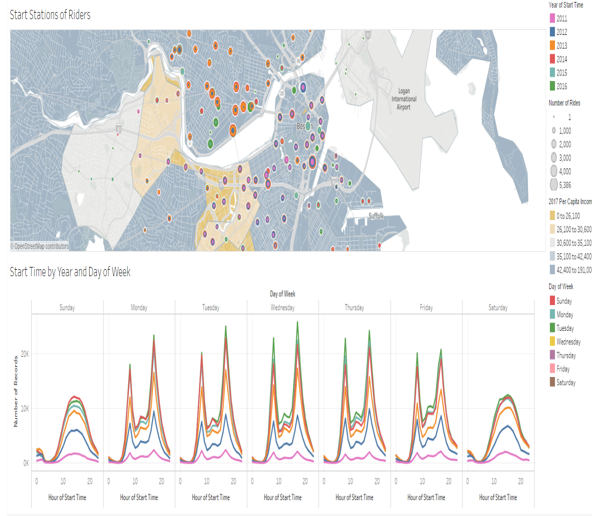 Trip Tendencies Suggest Majority High-Income Riders
View the full project
This visual captures the potential for Hubway to reach a wider range of income levels. The yellow, lower-income, areas on the map contain fewer originating trips than the dark blue, high-income areas (i.e. Roxbury, a lower-income region, has relatively few records). Trips in yellow sections appear clustered near colleges and hospitals, implying a lack of true representation of the areas. The shape of the lines on weekdays suggests that many riders are using Hubway to commute to work at 8:00 a.m. and return home at 5:00 p.m. Low-income workers tend not to fit into the 9 to 5 schedule.

5 Hubway Benefits in Numbers
View the full project
Five large benefits of using Hubway are listed on the Hubway website. These are fun, time, money, exercise, and environment. The benefits are described and are extremely valuable, but there really isn't any explicit examples, or 'proof'that the user will see these type of benefits. I created an infographic based on these type of tangible benefits. Using data available through Hubway, I was able to understand about the quanitity and style of trips taken by different users. 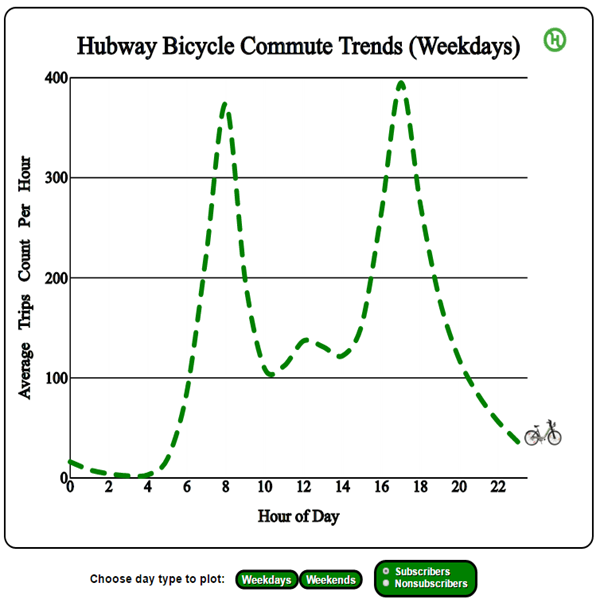 Animated 2D Plots for Hubway Commute Trends
View the full project
For the 2017 Hubway Data Challenge we illustrate commute trends of Hubway users by producing 2D plots showing average commute trends as we calculate average trip counts per hour for all data. The plots are artistically animated to show commute trends for weekdays and weekends for both subscriber and nonsubscriber users. 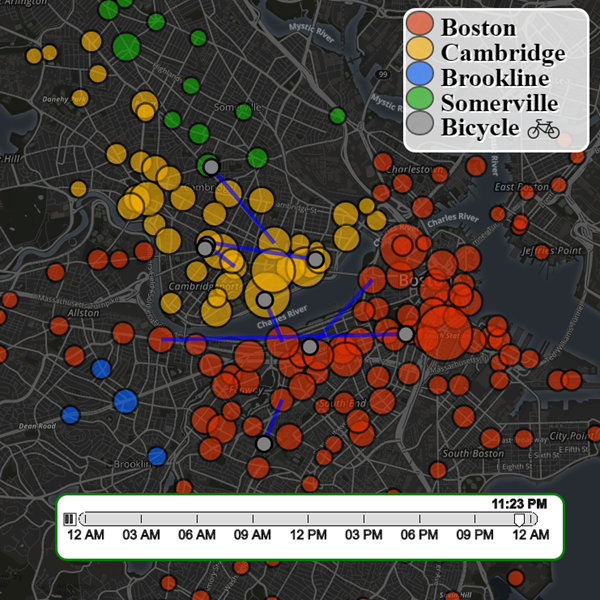 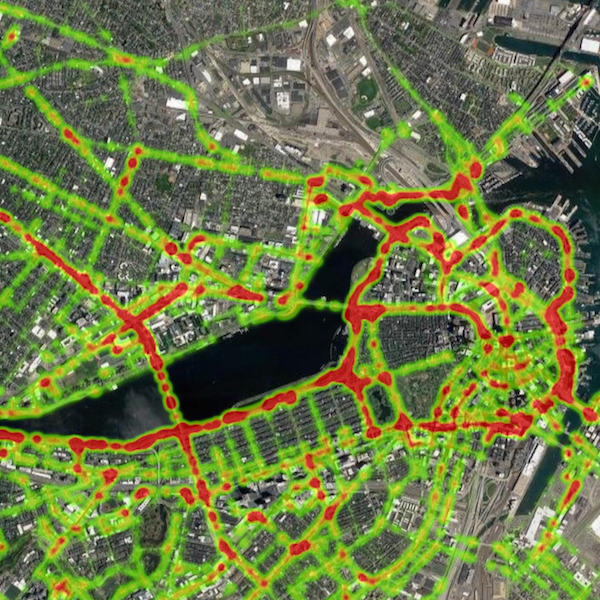 Hubway Heatmap
View the full project
This uses the Google Directions API to calculate the "suggested" path between the start/finish Hubway stations for every trip taken in 2015-16. It then combines these paths and displays them on a map. From there it is possible to pan and zoom in/out and see which roadways are most heavily used. These results might be used to suggest improvements in bicycling infrastructure. This analysis makes the assumption that bicyclists travel the suggested route, which is definitely an approximation but it seems reasonable. (And a strong second-best to having GPS-equipped cycles.) 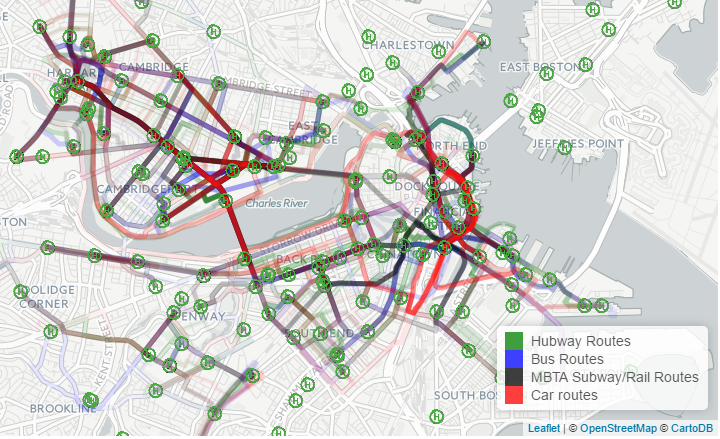 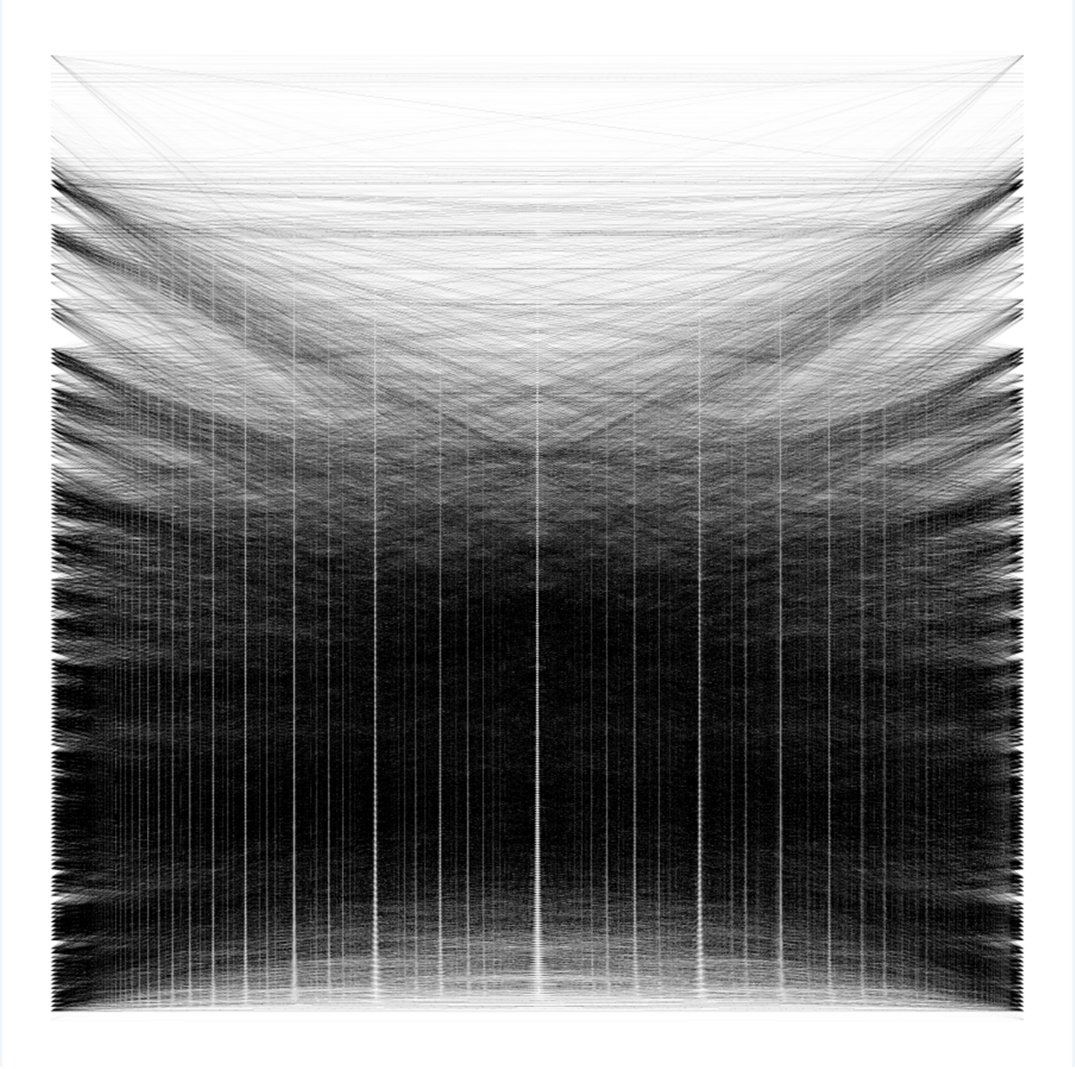 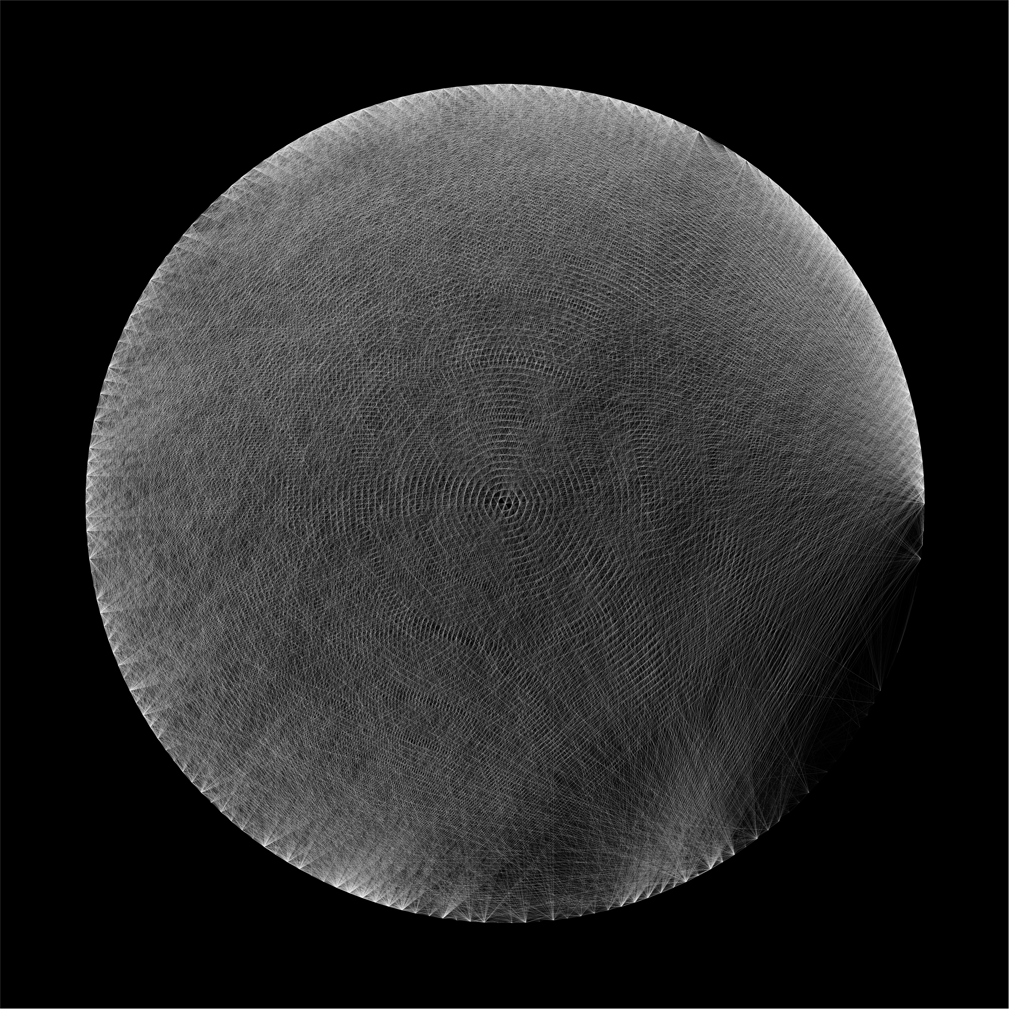 All Trips Radial
View the full project
2.4 million Hubway trips plotted as straight line segments between start and end stations. Stations are arranged at even spacings around the perimeter of a circle. 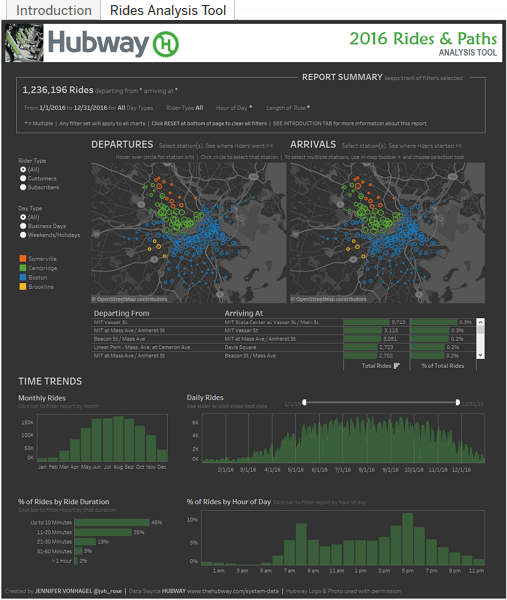 Hubway Rides and Path Analysis Tool
View the full project
Using all 1.2 million rides from 2016, this interactive, exploratory analysis tool answers lots of levels of questions. High level trends - rides daily, monthly, hourly, by duration, by stations on a map - are available, but easily become detailed analysis. For example, with a single click, I can see there are 600-800 rides from 8am-9am on business days, how long these rides typically last, and which stations are most departed from and arrived at. Path analysis is also available. E.g., click a departure station on the map, see where those rides end. See all the trends for that set of rides. 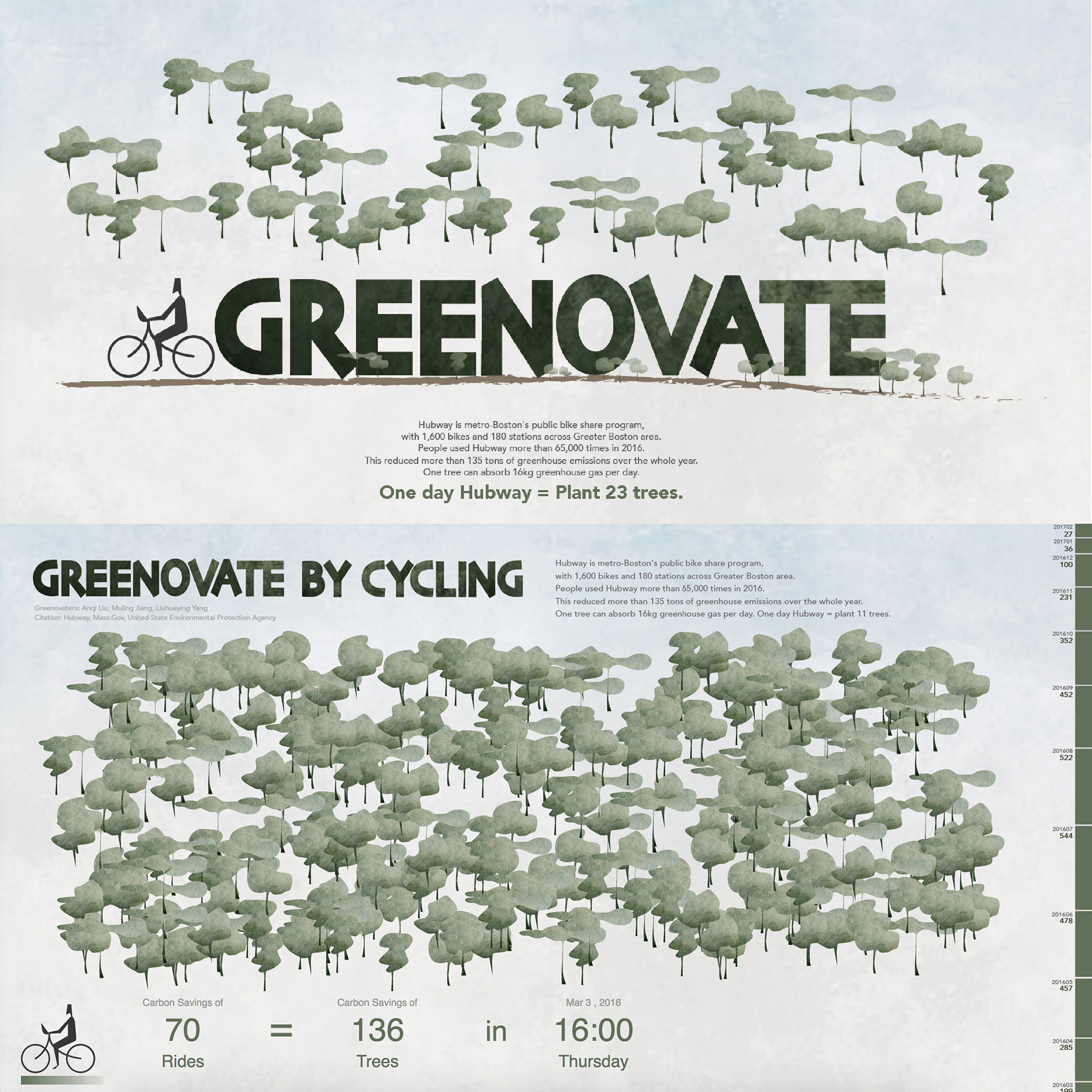 Greenovate by cycling
View the full project
People used Hubway bikes more than 65,000 times in the last year. Our team coded a visualization that expresses the carbon savings of biking in terms of how many trees it would take to generate the same savings. We want to encourage people to ride bikes more than driving. For our green city, everyone can join the Hubway program and do something. Team: Anqi Liu, Muling jiang, Liuhuaying Yang