On the evening of October 21st, member Justin H. of Cambridge became Hubway's official 5 millionth rider! We celebrated the occasion with a member prize drawing and some awesome gifts.

Justin took his ride in the pouring rain, departing Hubway's One Kendall Square at Hampshire / Portland station in Cambridge at 10:26pm, and docking 6 minutes later at the MIT Pacific / Purrington station. The ride may have been brief, and in the middle of a rainstorm, but it means Justin receives a free Hubway annual membership (to extend his own or gift to a friend), a Hubway t-shirt, and a pair of shoes from New Balance!

Just seconds later, member Kevin W., also of Cambridge, kicked off the next 5 million rides when he undocked a bike at the Ames / Main St station. "That ride on Friday night," writes Kevin, "was by far the wettest I have ever experienced. I went to run an errand in the middle of the rain storm and came back completely soaked, but I guess now I have a new pair of shoes to keep me dry!" Kevin uses Hubway mostly for commuting and shopping, and is a big fan of the Hubway valet service at MIT/Stata (weekdays 9am-Noon) and North Station (weekdays 4-7pm). To celebrate the road to 10 million, Kevin will also receive the annual membership, t-shirt, and New Balance prize package! 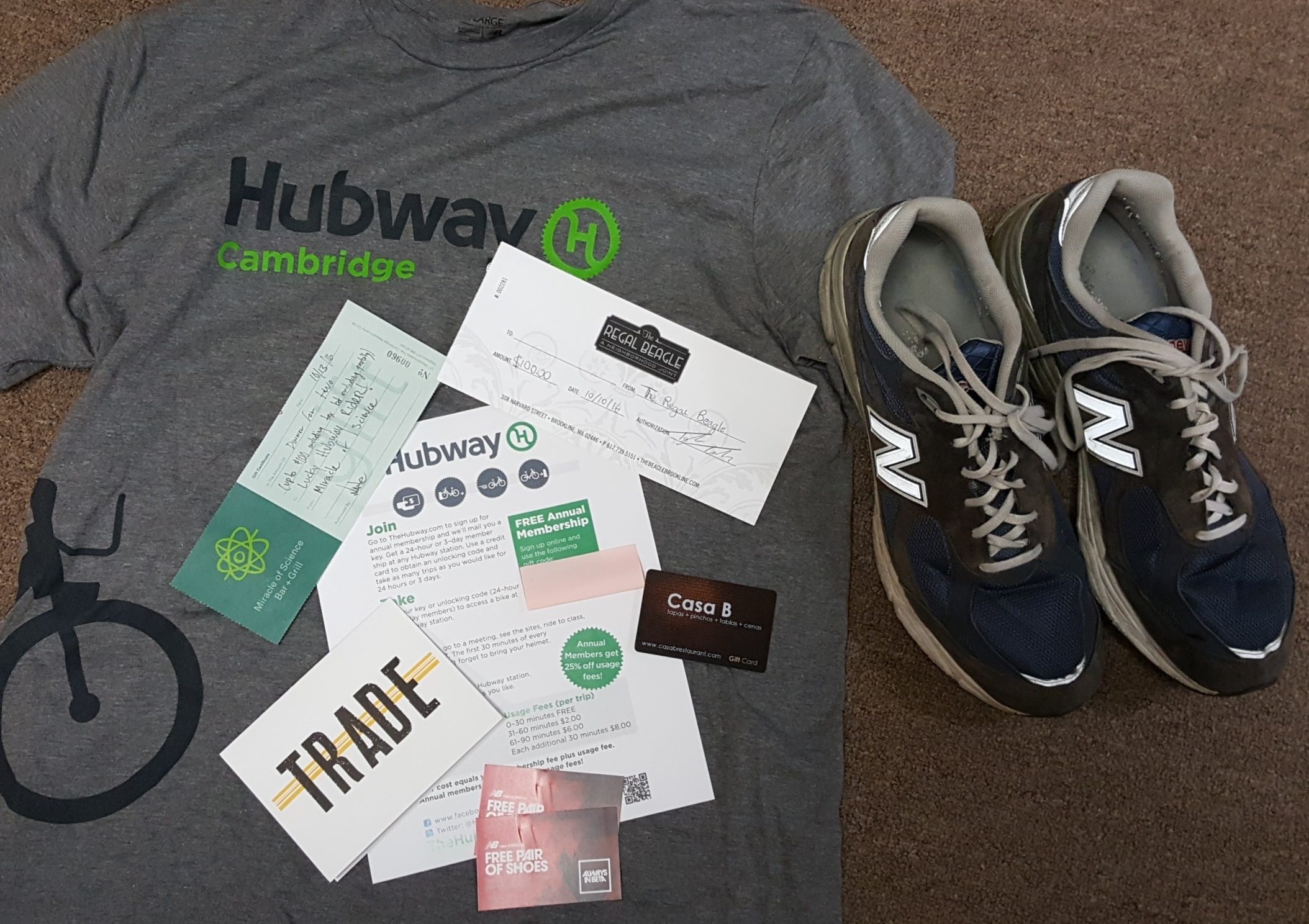 PRIZES PRIZES PRIZES! Some winners are still being confirmed. If you haven't heard from a Hubway representative yet, you have not won (but we do recommend checking your voicemail and email, just in case).

Member Wes R. of Boston will receive a Hubway t-shirt and a $100 gift certificate to Trade. Wes rides Hubway as much as possible, usually to head to the gym or back home. "I became a Hubway member to minimize my reliance on cars and public transit. It's good for the environment and a fun way to get healthy!"

Trade is an upscale neighborhood bar and restaurant focused on serving an innovative Mediterranean menu designed around locally sourced seasonal ingredients. The restaurant has been a staple in the Financial District and Fort Point area for over 5 years and continues to raise the bar on creating a consistently exceptional experience. Trade is a Hubway Silver Partner Corporate member.

Member Mark M. of Bedford will receive a Hubway t-shirt and a $100 gift certificate to The Regal Beagle. Mark rides Hubway mostly as "a great way to get around Cambridge during the day," and now he'll have a reason to ride over to Brookline!

Though the Regal Beagle is named after the much-loved local pub from Three's Company, the Regal Beagle certainly doesn't feel like a throw-back to the 70s or 80s. The dapper little restaurant is a true neighborhood bistro with chic décor, an affordable yet upscale modern menu of seasonal, creative comfort food and a cheeky list of inspired cocktails.

Member Tomoyo K. of Cambridge will receive a Hubway t-shirt and a $100 gift certificate to Miracle of Science. For Tomoyo, conveniently located stations are paramount to her use of the system. "I’m using Hubway mostly for commute to work," Tomoyo writes, "and I like that I can check the bike availability online."

Opened in 1991, Miracle of Science stands strong as the leader in geek-chic. Its menu is hand written onto the wall and it was one of the first restaurants to employ the open floor concept. This place is always packed with artists, musicians, geophysicists and computer gurus who know they don't have to go anywhere else looking for a good time.

Member Ruth A. of Boston will receive a Hubway t-shirt and a $100 gift certificate to Casa B. Why does Ruth ride Hubway? "I take Hubway to commute to work and school. I'm a graduate student at Boston University, and this semester I also have a clinical placement in Cambridge. For me, it's faster and cheaper than taking the T!"

Casa B is a modern interpretation of the traditional Spanish tasca. This tapas restaurant embraces the romance, warmth, and spice of Latin America. It has strong culinary roots in the Spanish Caribbean cuisines of the Island of Puerto Rico and Colombia’s Atlantic Coast, drawing further inspiration from many other Latin American countries.

The following members have been drawn to each receive a Hubway t-shirt and five Hubway 24-hour passes to share with friends and family [HINT: they make great gifts for the holidays].